A little over a year ago I began working on disintegration, for saxophone trio, and started exploring a few new notational avenues (or at least new for me). In the end the notation ended up rather opaque and non-representative of the sonic landscape I had in mind for the work. With other projects on my plate, I decided to chalk it up to a learning experience and move on. However, a year later, I decided to revisit the piece. Upon revisiting the work, and having worked with this particular notational interest in other works since, it set in just how opaque the notation was and spurred my desire to re-notate the work. Here I will provide a brief “case study” of disintegration, highlighting the different stages of the re-notation process as a way of showing the notation’s evolution from its original state to its current notational manifestation.

Annotated sample of the original score (click to enlarge):

The bottom stave represents the pitch content and, to a lesser extent, the general fingering sequence for the performer. This stave is the most “traditional” of the three staves and acts as a point of stability that gets obscured (or disintegrates) due to the other two staves’ operations. The next stave up is the air-quality stave. Moving from bottom to top, the air to pitch ratio increases from marginal air mixture to the point of almost pure air and no pitch, with a rest indicating pure pitch with no air mixture. Finally, the last stave indicates the performer’s mouth-placement on the reed and the amount of pressure to apply to the reed (the dynamics in the quotation marks). Again, the rest indicates no physical action and a return to the normal mouth-placement/pressure for the given pitch. Moving from bottom to top, the mouth moves from the tip of the reed to a fully swallowed position. 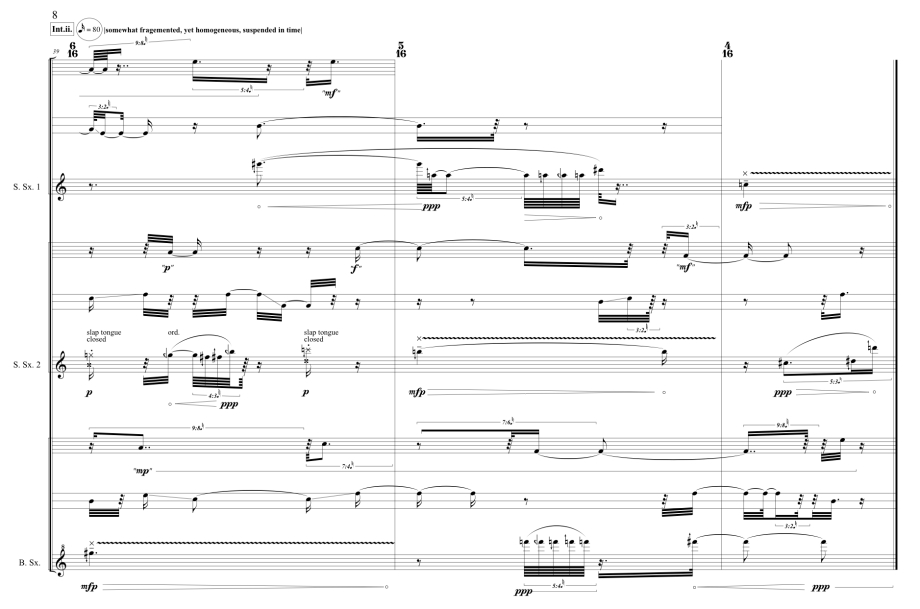 One major problem with the way the music is presented here is that there is no visual correlation between the notation and the different operations being carried out by the performer. Each stave looks nearly identical to the last one, and furthermore the level of specificity for each of the ‘auxiliary’ staves is too high for purely practical reasons (the reed is not long enough for five discrete positions, and air quality turns out to work best in a binary fashion – or at least not nearly as differentiated as asked for here). Terminology also plays a role in confusing the situation here. The phrase ‘air quality’ is actually quite problematic and not very representative of the desired sonic outcome. Therefore, in later examples, the term ‘air quality’ has been exchanged for the term ‘tone quality’ to indicate a diffusion of tone clarity. Furthermore, looking past the considerable number of technical problems of the above excerpt, the biggest problem is that the sound world that would be created from a faithful performance of the work would be far from what I had imagined. The resulting sound world would be something along the lines of very soft and delicate sounds in the pitch stave being obliterated by loud/uniform (regardless of pitch) squawks, which does not fit the character of this piece most of the time.

First stage of the re-notation process: 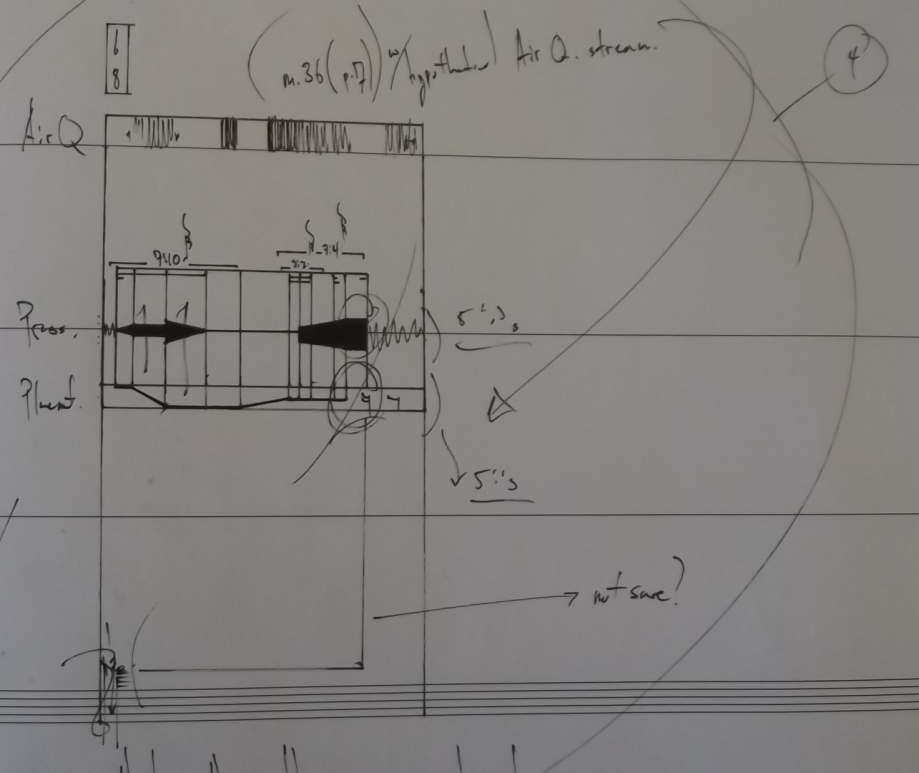 During this initial stage my main concern was making a clearer visual representation of the notation. The resultant notation is a literal re- notation of the previous material. The air quality stave has been turned into a continuous stream of data that changes based on a gradient scale, with white indicating pure pitch and black indicating almost all air vs. pitch. Air-quality’s stave has also had its rhythmic profile striped and turned into a graphic representation of changes. The mouth-placement/pressure stave has been separated and the amount of variation between amounts of pressure and number of placements have been dramatically reduced. In this example the top portion represents the amount of pressure the performer is to apply, with thicker beams indicating an excess in pressure and no beam indicating minimal pressure. The bottom portion is a simple graphic representation of the placement of the mouth on the reed, with the bottom indicating the tip of the reed and the top indicating a fully swallowed position.

More examples from the first stage of re-notation:

These examples represent a number of additional sketches that resulted during the initial stage of re-notation. The sketch above marked ‘1’ is of particular importance due to the fact that this notation carries over into the next stage of re-notation. It takes the mouth-placement/pressure staves from the previous example and combines them into one single stave. While none of these re-notations solve any of the practical problems that are present in the original notation, the visual correlation between notation and action is much clearer. This notation is also (to me) a much more intuitive representation of the actions the performer is required to carry out.

Second Stage of the re-notation process: 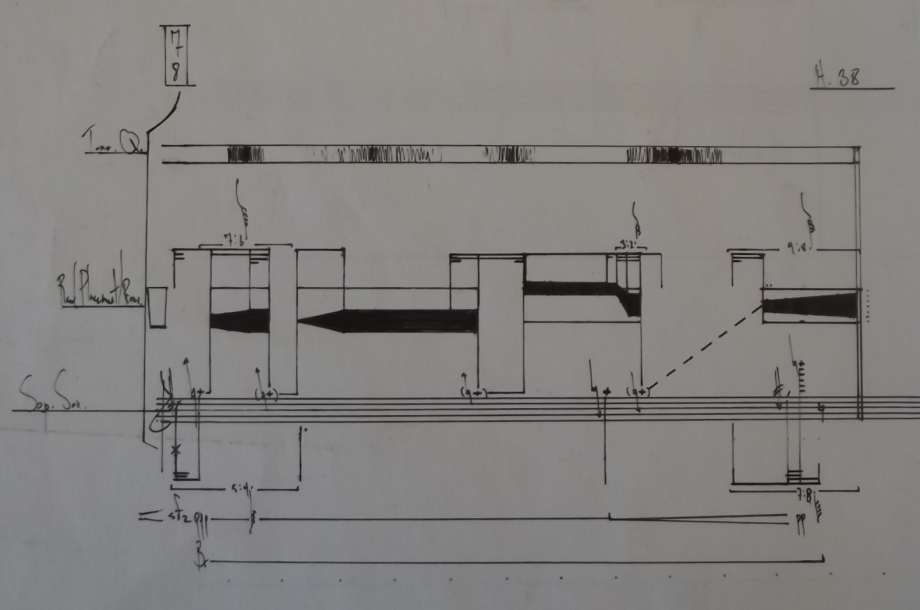 This example represents the second stage of the re-notation process. The largest difference in this second stage is that the way of getting in and out of the physical actions, and their relationship with/impact on the main pitch material is made clearer. The physical actions in the mouth-placement/pressure strand are much more of an outgrowth of the main material instead of a separate autonomous layer of activity. This notation also eliminates the use of rests, a notable problem with the original notation. However, at this point in the re-notation process there are still a number of fundamental problems; the main one being that fact that the sonic disparity between the sonic conception and the sonic result the notation suggests is still considerable. Additionally, the notation still seems to suggest three (or two, depending on how one looks at it) separate strands of activity instead of one strand of material that is being distorted and becoming destabilized.

Despite improvements over the original notation I was still generally dissatisfied with the fact that the tone quality strand in the previous re-notations was so far apart from the actual musical material and that its impact was not more immediate. It was at this point that I took a step back and re-examined my approach towards notation in this work. I got to a point where simply re-notating the music would not be enough: the original notation was flawed beyond mere visual representation; it was flawed from a sonic standpoint. I needed to go back and rethink what I wanted the piece to sound like and find a way of better representing my intention.

This prompted me to explore the idea of erasure as a compositional tool:

The handwritten score contains portions that are either lightly or heavily erased, with the amount of erasure related to the amount of tone diffusion. Using erasure as a notational tool also lead to two previously unexplored notational situations. The first was the very real physical engagement with the score, one that, for me, seems to suggest both a more direct, or visceral, indication of the desired sound, as if I am an active participant in the performance of the work. The second by-product of this physical trace is a resultant notational ambiguity. This comes across on two levels. First, that the visual image of the notation becomes slightly illegible and unclear therefore leading to the possibility of indeterminate pitches; second, that what exactly the performer is required to do in face of an erasure mark is left somewhat open.

In the final score, the only portion of the original notation that has remained unchanged is the pitch strand. This notation represents a different sound world, and even has different physical indications such as singing, diaphragm vibrato, and transitions from lip to teeth on the reed. Also, the idea of mouth-pressure has been completely wiped away and instead only a simplified version of mouth-placement remains. An image of the reed is given to specific the bandwidth of physical activation and a graphic representation of the movement along that span indicated by a line dictating general contours. The mouth-placement stave also introduces an additional degree of placement ambiguity in regards to both rhythmic placement and location of physical activation

In this final manifestation of the re-notation process, the physical actions required of the performer seem to be more of an outgrowth of the main material (the pitch stave), rather than additional layers of physical actions unrelated to the main material. There also seems to be a clearer relationship between the desired sonic result and the notational image set out. And while this relationship is made clearer here, that there is still a level of notational ambiguity (as mentioned above) derived from the use of erasure marks that leads to a constantly renewing performer/notation relationship; acting to engender further musical engagement.

[excerpt of the revised score]