I recently performed Charlie Sdraulig’s few as part of a house concert hosted by David Pocknee and I. Leading up to the concert I wrote about the preparation process and my initial approach towards staging a public performance of an inherently private piece. What follows is a reflection on my first realization of the piece.

Before reading on, I suggest taking two minutes to listen to an excerpt of few recorded in a semi-anechoic chamber for an idea of the piece’s sound world. A recording of the live performance was not made.

few was programmed in the second set of the evening and performed immediately after I performed my listening/sing-along piece, urtext (with live imitative vocal stylings by me alongside recordings of Amanda DeBore Bartlett performing Various Terrains and Sean Dowgray imitatively playing percussion overtop sounds of infants curated from youtube). More information on urtext and its complementary composition magic will find their way to my blog next week after performances in Huddersfield and London.

I performed few for seven friends in the living room of my flat. The performance of the piece lasted somewhere between 25-30 minutes. For the first realization I decided to try the staging approach outlined towards the end of my last article on Charlie’s piece. In condensed form, the staging I outlined is one where the piece is simultaneously performed alone, for myself, and for a few others near me. For this performance specifically: I sat facing away from the audience (performing the piece ‘alone’), played back a recording of me performing the piece alone in a semi-anechoic chamber into the room and to myself (while I was directly facing a pair of speakers), and had David wear headphones receiving audio from in-ear binaural microphones I wore during performance (constituting a performance to a few people close to me).

After the performance there was a discussion amongst the eight of us about:

Before I dive in too deep, I want to be clear about the fact that what I am doing here is reflecting on my approach towards a realization of few, not passing judgment on the piece. Indeed, many of the more sticky situations I raise in this article arise from my insistence in finding a satisfactory way of taking a piece designed to be essentially private in nature, and reconfiguring it for a live audience. The initial approach was not without its fair share of problems, but was also full of interesting insights that I hope readers will find intriguing.

It is difficult to write about few without having a direct firsthand experience of the piece to relate to. As I suggested in my first article on the piece, it is worth spending some time familiarizing yourself with Charlie’s composition. The entry level is set intentionally low and makes an understanding of the following discussion much easier to comprehend. The difficulty of description is especially complicated by the problematics of recording few.

Given the performance staging I settled on, I have a difficult time imagining an appropriate recording solution. Audio and/or video recordings do not seem like suitable options. An interactive audio track where it is possible to move in and out of parallel auditory/performative streams could be a possible solution, but I’m inclined to think that live performances of the piece are not inviting to any (readily available) forms of recording.[1] The delicacy of the sounds and their relationship to the environment become intimately connected to one’s physical experience within/of that environment.  [scratch that]

The physical experience of the piece in an environment is connected to comments from the audience about movement/sound restraint and my fleeting note about forms of claustrophobia that I identify in my first blog post on few. There was discussion amongst myself and the audience about the way in which few had the effect of making some people feel as though their bodily movements were becoming restricted. Because few works in a way where moments of non-continuous ambient sound constitute performative stillness and silence (a return to listening) the sounds of an audience moving (minuscule/unintentional bodily movements included) are initially read as a kind of non-continuous ambient sound that interrupts the production of sound. There is a sense from both the perspective of a performer an an audience member that their movements are potentially intrusive which can lead to a atmosphere in which the hyper-awareness of one’s nearly continuous non-intentional sound production becomes intensely claustrophobic. It is important to point out that this principle does not just affect the audience, but also affects the performer; when the audience makes sound, the performer is rendered sonically immobile, and when the performer makes sound, the audience is also (potentially) rendered sonically immobile.[3] 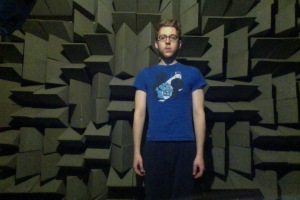 immobile in a quiet place

These considerations are only pertinent assuming an audience identifies the kind of sonic relationship between intentional and non-intentional sounds in few in the first place, which was not the case for many in the audience. In fact, only one person became aware and convinced by this relationship, and another flirted with the idea of this relationship, but did not end up adopting it as a way of framing their listening for the remainder of the piece. Other members did not pick up on this relationship, or if they did, the disregarded it in favor of different readings. I think if one thing is certain, it is that the listening situation in a public presentation of few is far from clear-cut. In fact, it is messy, and that’s wonderful!

There was a comment that the introduction of ‘theatrics’ or visual interruption (the production of sound by blowing across the tip of one’s thumbnail – reference page 3 of the score) seemed to suggest a deterministic and non-relational understanding of few‘s sonic material which reads more as me executing a series of sounds/action without regard to the sonic environment in which the performance is situated. I found this to be a particularly illuminating observation and seems like one possible justification for finding an alternative to the introduction of the thumb-whistle. It’s an incredibly effective sound that does something interesting to the environment and relates to the other sonic interruptions folded into the performance such as ‘hmm’ sounds and tongue-clicks. In the context of a private/alone performance of the piece, this visual element is insignificant. However, for my interest in staging a public performance of few, the reserved nature of few combined with the fact that other sonic interruptions were non-visual, seems to suggest a need to consider more carefully the ramifications of introducing visual disturbance.

The last aspect of the performance that I want to touch upon is the difference of psychological states for performer and audience. In much of Charlie’s work I am able to sense a deeply focused and intense psychological (and in some instances, physiological) state but often feel as though I am just outside of a direct relationship with the performers’ experience(s). There is often a sense that the performers of Charlie’s music are placed into listening situations that they would not otherwise enter into without the conditions of interaction established through Charlie’s scores.[4]

I find it frustrating (though not necessarily in a negative sense) that I am often just outside of an almost telepathic conversation taking place between performers placed in heightened states of sensory perception. In addition, the nature of interactions are often obscured through the work’s residence at the threshold of audibility. It’s almost as though the sounds are a whispered byproduct of a conversation taking place just barely within the realm of music. This seems intentional as well, and produces a distinct aesthetic. This frustration with the music provokes my creativity and gets me excited about finding ways of transcending a perceived limitation of communication. I’m interested in the variety of ways in which an outside audience member may enter into deep empathy with performers through means of distancing. I am currently unsure if this limitation is possible to transcend with few – if it is possible through performative means alone to adequately communicate the depth of the psychological tension, or if my approach of closeness through distance has potential at all. From the feedback I received after my first realization of few, I think there is potential, but the finer details of how to navigate the terrain still need more consideration.

[1] – Note that live performance in this context is indicative of a performance that takes place with other aurally sentient human beings in the same spatiotemporal location.

[2] – A performance devised for Oculus Rift?

[3] – For me, I correlate sonic immobility (at least in this context) with physical immobility given the extremely quiet environment in which few situates itself.

[4] – I had this feeling most vividly during a performance of binary by Distractfold Ensemble.

This site uses Akismet to reduce spam. Learn how your comment data is processed.