I’m very happy to be able to share my recent recording of Charlie Sdraulig’s 2013 vocal solo, few. I’ve written about this piece on a couple of occasions, and for some background on my work with it you can read here and here.

Towards the end of April, Charlie asked me if I would be interested in performing few again at a house concert in London. I agreed and had a chance to go to work directly with Charlie on the realization. With my earlier work on the piece, I was concerned with exploding the ambiguities of the piece, especially with respect to how many ways I could simultaneously articulate elements of intimacy, privacy, inner perception, and the general implications of a sound world that derived from, but almost barely contributed to, an aural environment. At the time, I was trying to completely open up the work – to find my interpretation of the work and the way its intentions resonated with not only my own ways of thinking about sound and performance, but the personal knowledge I had accrued through friendship with Charlie about his own relationship to sound and music. I was trying to find myself through the musical exploration, coming to terms with how I hear and listen to space.

As I wrote in reflection of my first performance, I was not completely satisfied with the way my interpretation was articulated. When I had the opportunity to work directly with the composer, I took the chance to try and go inward with the piece, stripping away all the non-essentials, and try and find a consolidation of the work. I went back to the score again, and worked to unpack more of the structural elements to be found throughout the scarce score, and strived for a more rigorous consistency of mouth-shapes along with their respective sounds. The process was one of constantly re-evaluating my relationship to the piece, thinking more about the sound/sound-context, and refining my vocal technique.

When I meet with Charlie, we continued to take the piece even further inward. It was the first time I’d performed the piece for only one other person (let alone the composer), and it completely changed my attitude towards the piece and the idea of how I might stage the performance for more than one person. 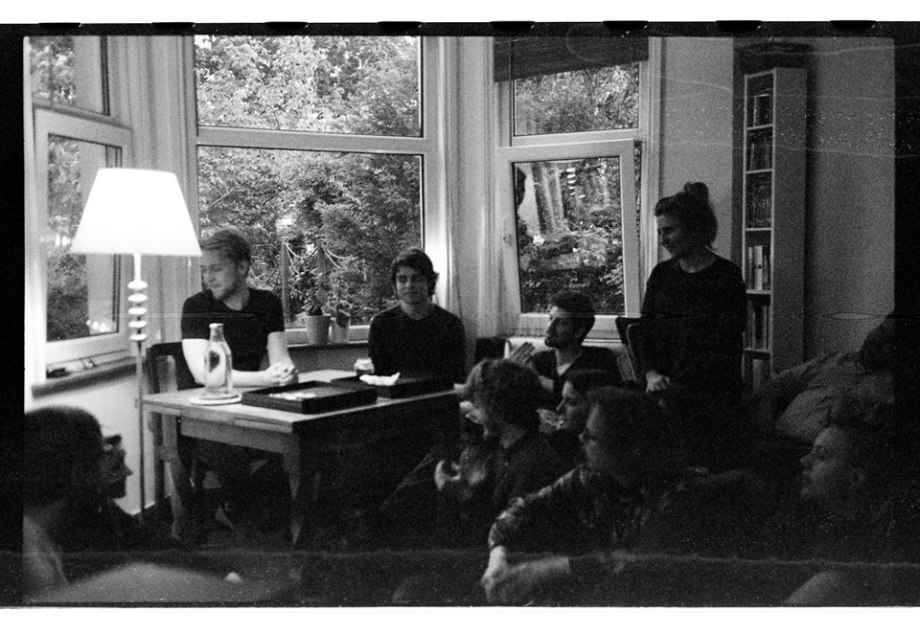 I could talk much more about the working process with Charlie and how we approached the house concert performance here, but instead, Charlie and I have agreed to conduct a interview later on this month reflecting on our collaboration that I will post later.

At any rate, after my performance I decided to make a simple video recording well matched to the interpretation of the piece Charlie and I collaboratively arrived at. It tries to frame the bareness of its existence. It’s incredibly straightforward in its presentation, and it involves on the part of an audience a willingness to slow down and pause long enough to enter into the private/inner space of another human’s subjective aural perception. And, while I have many reservations about presenting this piece through this visual medium (video) and platform (internet) – for matters of attention, immersion, a feeling of physical proximity, and others – I want to share it i as an invitation to others to enter into and engage with the piece’s musical ideas, which I find fascinating.

Because this recording is extremely quiet it should be, where possible, listened to in a quiet environment with playback equipment well suited for low amplitude sound. In some ways, the use of closed noise/environment-cancelling headphones are ideal, as the recording’s sense of immersion within the performer’s aural space is important.

This recording is a manifestation of my work with Charlie and is in many ways reflective of how I hear Charlie hearing. I present it in friendship and hope it is enjoyed by those that chose to spend their time with it.