I recently contributed a new piece of work titled Cues for Jessie Marino’s Weekend EP Project. Here is how Marino describes the label:

“The Weekend EP Project gives artists 72 hours to complete an EP. It’s an excuse to solidify work that you’ve been tinkering with, or a way to try to extend your artistic tendrils or a way to be another person for a weekend or just a deadline (which we all desperately need)!”

In 2016 I made a pair of pieces called Affective … hopes of being moved to feel … Ripples. In Affective, an ensemble of performers wear earbuds that play an audio recording/guide that they listen to while mingling before the concert and during intermissions, and performing a program of music. The audio they hear is a collection of sounds that correspond to four basic emotions (happiness, sadness, fear, and disgust) and affect the performer-listeners, potentially modulating the emotional tenor of the music-event space.

After the premiere performance of Affective, one of the performers made the observation that they were more able to give way to their emotions and split their attention between the audio recording and the staged performances when they were an audience member rather than a performer. Since then, I’ve variously contemplated the idea of making something that audience members could listen to during a music event that would subtly unsettle any audience/performer divide, sanctities of “musical work”, and enhance the sense of hearing and act of listening. Cues is my first attempt at such an aim. 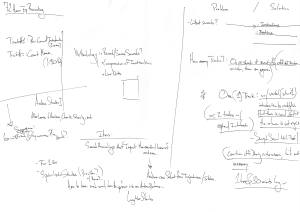 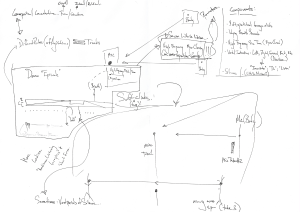 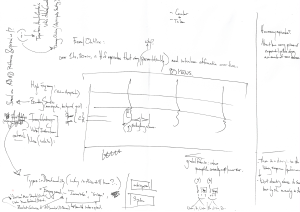 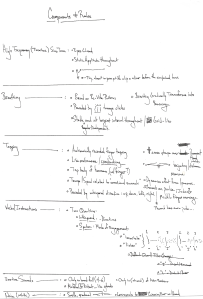 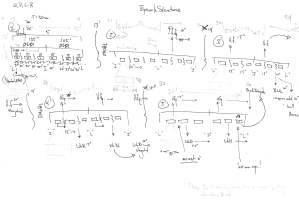 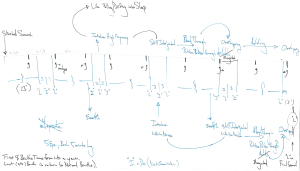 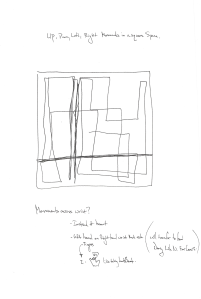 Up Down Left Right Movements in Square Space 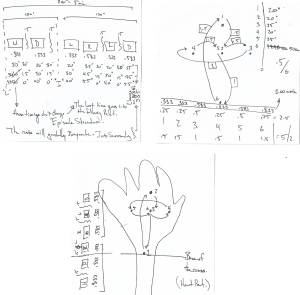 Up Down Left Right Movements Order Duration and Location


Over 25-28 December I conceived and produced Cues, a concert-length EP designed to be listened to by an audience member alongside and during a programme of other pieces of music at a music event. For 90 minutes, the audience member wears an earbud and hears a collection of different sounds and instructions amidst large intervals of silence. In the same way that my piece BUZZED for solo horn, or Beavan Flanagan’s No sweeter sound than my own name for solo voice, uses sound instead of noteheads (or visual imagery in general) as a signifier of performance actions, the audio in Cues is sometimes-score. The audience member moves between two modes of engagement with the audio in Cues. When they hear the word “listen” they simply hear the sounds alongside whatever else is taking place during the music event. When they hear the word “imitate” the sounds that follow take on choreographic significance; tapping sounds correspond to tapping gestures on the back of the wrist, high pitches frequencies lead one to close their eyes, and waves of noise prompt the listener to cover their ears.

These aspects of Cues and how the piece is designed are inspired by a range of influences:

Interested in trying Cues?
Listen to track 1 off the album and follow along with the transcript for complete information on how to play, listen to, and perform Cues: https://weekendepproject.bandcamp.com/album/cues

Please leave feedback as a comment/review on the Bandcamp page.

I have been workshopping a new composition titled Intermission Music. The piece is a trio being made for and with Callum Coomber, Kathy Hart, and Rosalind Ridout, members of SHOAL and students at the Royal Northern College of Music.

Intermission Music takes place submerged beneath concert experience. Embedded audience members overlay near-silent waves of sound onto dictaphone recordings of the programme, emerging in the interval as moments of localized, embodied playback that temporarily unsettle the social surface. The ripples dissipate, a moment is already being forgotten, though undercurrents are produced; an undertow of musical memory gently tugs and submerges conversations, interactions, and, ultimately, the concert experience into more physically and musically performative depths.

We present the premiere performance of Intermission Music alongside performances by Kupla and Ryan Patrick Maguire, and a piece by Michael Pisaro on 3 March as part of Michael Brailey’s fifth VIRTUALLYREALITY “Submergence / Emergence” at Partisan in Manchester. 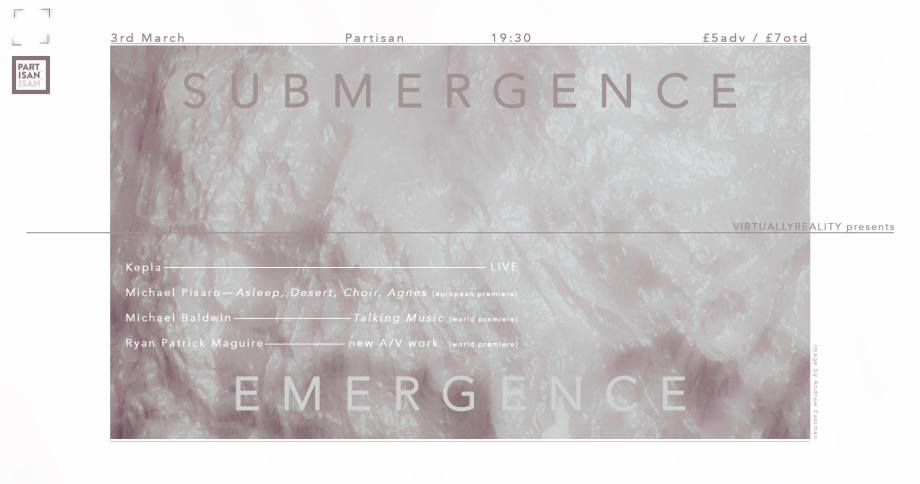 Cues will be performed at the University of Hull on 9 March as part of CLAC #2, a new music and performance art series organized by Brice Catherin. Cues will be presented alongside a free improvisation set led by Colin Frank and performances by Mark Slater and Simon Desbruslais of pieces by Mark Slater, Morton Feldman, Jonathan Harvey, John Lely, Sebastian Forbes, and Colin Frank.

In February, Samuel Stoll and I gave a concert of new vocal and French horn solos/duos in Manchester at Nexus Arts Café. During our concert, we performed Louis d’Heudieres‘ Laughter Studies 2.

The next day, Samuel and I made a recording of our collaboratively developed French horn piece, Buzzed.

Tempus Konnex published an essay I wrote on Seth Kim-Cohen’s idea of retrospective composition in relation to my toy piano solo, Composition with the Sound of Its Own Découpage that can be read here.

My 2014 trio for French horn, piano, and double bass, this is not natural, has been re-released in the form of a score-following video as part of Score Follower / Incipitsify’s newest channel/project Mediated Scores. I’m very happy to be in the good company of composers Dan Tramte, Celest Oram, Elena Rykova, and Jessie Marino in the channel’s first wave of uploads.

My trio for violin and objects was premiered as part of 840’s New Music for Violin and Objects concert in Islignton, London. An article focusing on the video-score for the violin part can be read here.

I finally decided to upload to my website an essay I wrote in 2011 about Klaus Hübler’s music and notation that can be read here.

This blog post is about one of the three scores from my trio ||: trouble letting go :|| – ]HoldingOn[ – 4 Echoes: whistle, whisper, gasp, silence composed for violin and objects. The trio is a collection of three pieces that are intended to be simultaneously performed together and was written for the London-based concert series 840 for their ‘New Music for Violin and Objects’ programme. In this blog I reflect on some developments in my work with video scores in the piece ]HoldingOn[.

video score for ]HoldingOn[ / instructions for reading the score

Background
]HoldingOn[ is my second self-published video score and extends upon some of the previous work I was doing in this is not natural, a trio for French hornist, pianist, and contrabassist.[1]

To briefly recap the work I did in this is not natural: the score for this is not natural is made/composed from edited video-documentation of pre-recorded performances of a choreographed sequence of movements lasting fifteen seconds. Inspired by Bill Viola’s Quintet of the Astonished, large portions of the original performance documentation were extremely slowed down to fill the duration of nine minutes. Frames from the original footage are spread out across larger distances, breaking the illusion of apparent motion, and through a process of interpolation, new frames are generated to fill the space in-between original frames and render the movement/footage smooth. END_OF_DOCUMENT_TOKEN_TO_BE_REPLACED

Last July I moved to Manchester and am excited to now be presenting my first concert in the city in collaboration with the Berlin-based French hornist Samuel Stoll:

Samuel and I have been collaborating for the last year, sending back and forth recorded improvisations and other materials. This concert is a combination of our own repertoires and the piece that emerged out of our collaboration with each other. BUZZED will feature recently composed experimental music and performances for solo voice and french horn in which I’m turned into a still-life, Samuel displays feats of embouchuric dexterity and stamina, we both explore a sonic and aural study of laughter, and soon-to-be legacy media are barely brought to life with the nylon hairs of violin bows.

Beavan Flanagan and I have been busy at work editing and mixing the audio from our recording session of No sweeter sound than my own name, and are excited to be able to finally share the result with everyone. Watch and listen to the video below and then read back through our reflections on the collaboration and development process to find out more about the work.