This page presents media relevant to Michael Baldwin and Juna Winston’s application for the 2018 Winter Intensive at High Concept Laboratories.

Engagement with media is cued from the left side of our application document:
hcl_winter-intensive_2018 [‘Performing Concert’ — Michael Baldwin and Juna Winston].pdf [click to view]

Engagement is directed through use of time-brackets for viewing and listening.

Cues is a concert-length audio recording intended to be listened to by an individual audience member during and alongside the course of a music event. For 90 minutes, the audience member wears an earbud and hears a collection of different sounds and instructions amid large intervals of silence.

We intend to compose a new version of Cues derived of sounds made by us as performers to act as a structure and framework for the concert-performance we develop.

listen either until finished reviewing application, or beyond; keep playing in background while engaging with application and media below

Erasure is a solo for trombone that explores dissociative physical notations.

We intend to integrate a performance of Erasure into the concert-performance we develop.

a kind of nostalgia

a kind of nostalgia is a music-performance piece that explores techniques for distorting musical material through physical mimicry and adaptability. The piece involves an experienced ‘guitarist’ playing a simple piece of their choosing from memory, and another ‘performer’, who may or may not be an experienced guitarist, holding a guitar. The ‘performer’ is sat across from the’ guitarist’ in a mirrored position and is read like a score, their physical movements being copied by the guitarist. In the following performance, the ‘guitarist’ is on the left and the ‘performer’ is on the right.

We intend to devise a new version of this piece for two trombonists.

We intend to incorporate the performance practices from these scores into the concert-performance we develop.

Michael Baldwin is an American composer currently living in Chicago.

He has discussed his work at the Time Stands Still: Notation in Musical Practice conference at Wesleyan University, and at guest presentations for composition studios at Bowling Green State University and the Hochshule für Musik und Theater Leipzig. Notable mention of his work includes a group profile of artists working with new score forms by Tim Rutherford-Johnson in The Wire, examples from his vocal piece Various Terrains in the second edition of Michael Edgerton’s The 21st Century Voice, and ephemera from his S[h/c]attered Shards of Experience series in Nomi Epstin’s ‘Musical Fragility: A Phenomenological Exploration’ published in Tempo.

He is also active as a writer in the field of music, having published research in CeReNeM Journal, guest blogging for Tempus Konnex and The Rambler, profiling artists for Weisslich’s ‘Better Know’ series, and reviewing for Tempo.

He holds Ph.D. and Masters by Research degrees in Composition from The University of Huddersfield where he studied under the supervision of Aaron Cassidy and Liza Lim, and a Bachelor of Music in Composition from Bowling Green State University where he studied under Burton Beerman, Christopher Dietz, Mikel Kuehn, and Andrea Reinkemeyer. Other teachers have included Peter Ablinger and Franklin Cox.

In addition to composing, he is an occasional performer. Notable projects include a study and performances of Charlie Sdraulig’s vocal solo few, a realization of Luke Nickel’s conceptual living-archive piece factory, and performances of a voice and electronics solo, No sweeter sound than my own name, composed by and collaboratively developed with Beavan Flanagan.

Since 2014, he has been co-curating and producing the UK-based experimental music and performance series Weisslich. 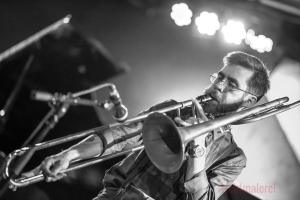 Juna Winston is an American trombonist based in Virginia who performs regularly throughout central Europe, and specializes in the performance of contemporary and experimental music. In 2013 he moved to Switzerland to work with Mike Svoboda at the Musik Akademie der Stadt Basel. Since then he has performed regularly as a freelance trombonist with Klangforum Wien and Collegium Novum Zürich, where he is a member.

He collaborates frequently with young composers and has premiered many pieces.  He is committed to the exploration of new techniques and media in the language of contemporary trombone, and develops these ideas in solo, multimedia, and improvisation settings. This work has lead to a grant from the Austrian Federal Ministry for Europe, Integration and Foreign Affairs, to support the presentation of sound experiments at Austrian Cultural Forums throughout the world.

He has also worked as a brass instrument maker.  He apprenticed with George McCracken in Barhamsville, Virginia, and also worked for the S.E. Shires Company in Boston. He has built and repaired all manner of brass instruments and performs on a trombone of his own design and construction.

He studied in America at the University of Maryland, College Park, Bowling Green State University, and Boston University. He also performs and teaches under the name Kevin Fairbairn.